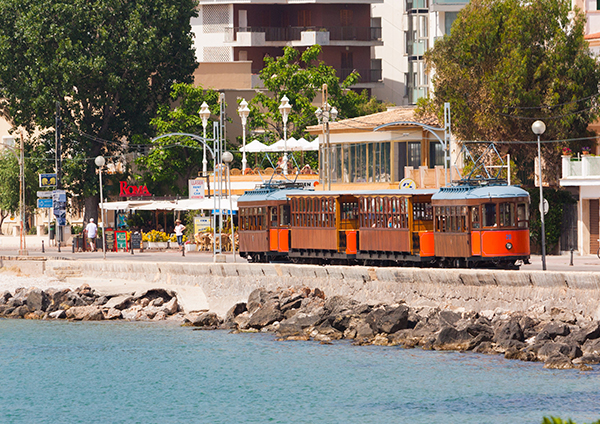 If there’s one thing that puts Sóller in the international limelight it has to be its incredible location in the Serra de Tramuntana, declared a World Heritage Site by UNESCO, and the historic train which unites this mountainside town with the capital of the island, Palma de Mallorca, during a beautiful journey through the idyllic Mediterranean landscapes which Mallorca gifts us with. In this blog article we want to tell you about this train, which year after year connects thousands of visitors from the city with the Lluna Aqua by Unusual Hotels in Sóller. Will you keep reading?

A means of communication between Sóller and the big city

This perfect location in Sóller has not always had easy transport connections with the rest of the island. At the start of the 20th century, its industry and wealth presented difficulties to be spread throughout the rest of the Mallorcan landscapes, as where the Serra de Alfàbia is located it closes off the town in a valley which at that time the citizens of the town could only cross by going over the top. It wasn’t until 1904 when the inhabitants of Sóller decided to kickstart a project of a railway that linked the town with the city of Palma and in 1907 they started work on it. A long tunnel of about 3 kilometres was built that crossed the Serra de Alfàiba and at the same time the railway line to Sóller began to be built in Palma. In 1912 the train was a reality and the idiosyncrasy of Mallorca has been preserved even today, meaning that from Palma you can reach the Lluna Aqua by Unusual Hotels in around an hour.

The year after the train was established, the Sóller tram line was created, the first electric tram in Mallorca, which connected Sóller and the Port of Sóller. The project was designed and managed by the well-known engineer, Pere Garau. Spanning across 4,868 metres, the electric tram transports thousands of passengers from the town to the port, interestingly amongst its carriages those numbered 5 and 6 are the original ones from when the line was first established. In 1929 the electric traction was established between Sóller and Palma and it was then used for touristic purposes, which for dozens of years has been a tourist attraction for international visitors.

An original and unforgettable means of transport

The option of using the train from Palma to the Luna Aqua by Unusual Hotels as a method of transport is a magnificent opportunity to appreciate locations along the way between the two destinations. The Santa María stop, Bunyola or the Pujol de’n Banya lookout point are small gems that cannot be seen with the naked eye when travelling by car. Not to mention the beauty of the Tramuntana mountain range and the almond groves at its feet, observed from a historic train on an idyllic island. Are you really going to miss it?

Reserve your room At Lluna Aqua by Unusual Hotels in Sóller

Experience the magic of travelling the island from south to north in the historic and carefully constructed Sóller train and stay at the Lluna Aqua by Unusual Hotels in Sóller to live an unimaginable story in the Mediterranean. We can guarantee that it is something which you must experience at least once in your lifetime. Reserve your room on our website and enjoy the benefits which we offer for direct reservations: a promoweb 10% discount, continental breakfast, bottle of cava, free minibar and late check-out.

Celebrate Christmas with Lluna Aqua by Unusual Hotels in Sóller

With Lluna Aqua by Unusual Hotels in Sóller, discover the charms of this magical town in the heart of the Mallorcan mountains