Discover the magical story behind our hotel in Sóller 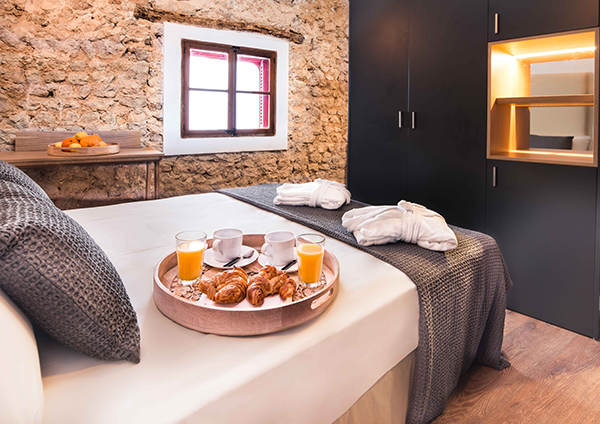 The Mediterranean Sea is well known for its beauty, for its people and for its gastronomy. Often its coastline is considered its shining glory and at times it can be its lifestyle. But what many don’t know is that this idyllic corner shelters a unique island, known for its versatility, weather and beauty: that is Mallorca. As the largest of the Balearic Islands, Mallorca has breath taking landscapes and a rich past filled with historic tales which are still remembered today. Amongst its most important features, the Serra de Tramuntana stands out most, a mountain range declared a World Heritage Site by UNESCO which has hidden within it the spectacular environment of Sóller, one of the world’s most beautiful towns. They say that this community has a special and irreplaceable essence, but what is certain is that between its attributes and corners, what stands out is our hotel in Sóller, Lluna Aqua Hotel, a building constructed with history and emotion, which opens its doors in 2019, with an unimaginable history behind it. Would you like to know more about our history? We will be telling you all about it in this article.

The modernist love nest of our hotel in Sóller

Our hotel is located in the old town Sóller, where the town’s history is still present and forms part of a neurological centre of interest of the Serra de Tramuntana. It is a building dating back to the beginning of the 20th century located only 10 metres from the Plaza Constitución, one of the birth places of modern architecture in Mallorca. Even though the hotel has its own purpose today, it was not originally designed for what it is used as today.

Lluna Aqua Hotel was built on the history and the emotion of its people. The house which serves as a foundation for the services which we offer has been closed for almost 40 years. The building was completely renovated at the start of the 20th century by an “hereu” (heir) of Sóller after getting marrying the love of his life, a French woman. He wanted to build his own love nest and so he hired the best artisans of that era, focusing the style on modernism and Art Nouveau. Following the death of the heir the property was closed. The love nest closed its doors in 1978 and in 2019 Unusual Hotels has reopened this jewel, it has been reformed and renovated to bring back all of the magic and love that it was built with. All for you to enjoy.

Get know Sóller and its charm

Sóller is one of the most charming towns in Mallorca. It has a distinctive touch. Its strategic location can be found right in the heart of the Serra de Tramuntana and has been established since the Muslim era of Mallorca. Nowadays the town is widely known for various things such as the quality of its oranges, which are transformed into countless food products such as ice creams, jams and juices; the famous Sóller Train, which travels from Sóller to Palma de Mallorca and vice versa and the touches of modernism left behind on its buildings frontages. Our hotel in the old town of Sóller has aesthetically collaborated to keep the Art Nouveau essence alive, which is well known and admired.

If you want to discover Sóller and the essence of the Mediterranean though your sense of taste, we have some great news. Our hotel in Sóller has its own restaurant, Sa Llunàtica Restaurant, where you can savour the famous Sóller oranges, a grand variety of Mediterranean cuisine and the best brunches, lunches and high class dinners. We want your stay in paradise to awaken all of your senses.

Reserve your room at our hotel in Sóller

Are you planning your stay in the modern love nest of the Serra de Tramuntana? Reserve your room at our hotel in Sóller and be carried away by the magic of Mallorca and its people. You can discover its culture, traditions, its history and most importantly, the exact reason behind why the Mediterranean Sea carefully protects and guards this small corner of the world. We will be waiting for you!

Previous Modernism in Sóller
Next Hotel in Sóller: Unique rooms with modernist names