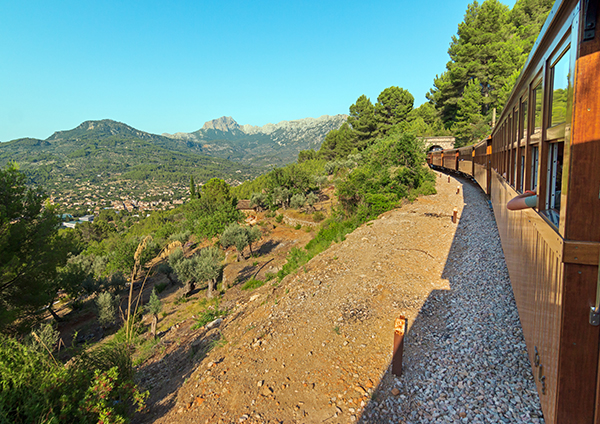 Our hotel in Sóller has hidden within it an incredible history which we have to thank for our existence and a magic air which is breathed on a day to basis amidst our modernist walls. Apart from the main focal points of our interior which add value to a stay like no other, there is also an intangible attraction: our surrounding. Sóller is one of the prettiest towns in the Mediterranean, and there’s no one who knows the area as well as we do. Would you like to discover the secrets of the birthplace of our project? We will be telling you all of the secrets of the area which surrounds the Lluna Aqua Hotel in this blog article.

Hotel in the old town of Sóller: A pearl of the Serra de Tramuntana

Sóller is a town located in the west of Mallorca, it lies amongst the impressive mountains of the Serra de Tramuntana. Well known for being in the valley of oranges, also known as the “Golden Valley” for the quality of its products and the great climate which surrounds it. In fact, this factor has made the town an economically efficient community. The trading of its citrus fruits opened its borders both inside and outside the island to an international community. At Lluna Aqua Hotel, our hotel in Sóller, we always complement our setting with these distinctive oranges. A local touch that makes a unique experience.

The exportation of oranges and the opening up of its borders to the outside world meant that the fortunes of the Sóller inhabitants as well as those of foreign visitors who were besotted with the area were invested in the town. Which is why the centre of the area is home to impressive modernist buildings and influences from other countries and cultures. Without this international community, our hotel would not have existed.

Accessing our hotel in Sóller via different routes

For many years, trying to access the town of Sóller has been an adventure in itself. Due to it being located within a valley and surrounded by mountains, access to this charismatic Mallorcan town had to be done via the Coll de Sóller, a mountain pass with an altitude of almost 500 metres had to be followed in order to reach Sóller. Since the 90’s this tricky road has had an alternative: the Sóller tunnel, a tunnel which crosses the mountain and draws a straight line to the town. Up until 2018 it was a toll tunnel for all visitors and locals, but it is currently free. Another classic method to reach the town is by using the Sóller train, a train which dates back to 1912 and connects Palma de Mallorca with Sóller along its 27.3 km and also connects Sóller with its port. It is without a doubt one of the most quintessential tourist attractions in Mallorca.

Amongst some of the main attractions in the town of Sóller, you will find the central Plaza de la Constitución, only 10 metres from our hotel in Sóller, where you can discover the majority of the town’s main attractions, such as the Sant Bartomeu Church and the Sóller train line. Along its outskirts you will see many examples of modernism such as Can Prunera, an Art Nouveau building which has been excellently maintained, under its roof it holds works from Kandinksy, Picasso, Warhol and local artists such as Miquel Barceló and Francesca Martí. Other attractions include the Balearic Museum of Natural Science (Museu Balear de Ciències Naturals) and the Botanical Gardens (Jardí Botànic).

Reserve your room at our hotel in Sóller

We could tell you every little thing that makes the town we call home a unique spot but the list would be endless, there is no better way to experience it than by doing it yourself and staying at our hotel in Sóller. Reserve your room through our website and enjoy the exclusive benefits that we offer by reserving directly with us: a promoweb 10% discount, continental breakfast, a bottle of cava, free mini bar and late check-out. Discover the “Golden Valley” during a luxury stay.

Discover the magical story behind our hotel in Sóller

Celebrate Christmas with Lluna Aqua by Unusual Hotels in Sóller